Nurph has officially launched Group Video Chat for Twitter to take your Twitter Chat experience to the next level. And the feedback we're getting is just incredible. We've even been lucky enough to have @GuyKawasaki stopping by the official #Nurph Channel to chat with us on camera, and Venture Beat wrote-up the Group Video Chat feature in Twitter Chats Get Social with Nurph's Video-to-Video Streaming. Just check out the video...

The first Twitter Community adopted a Nurph Channel in the Summer of 2013. Since then Nurph has continued to grow with more communities, more chats, and more tweets being published every month. In fact, @ReeceMastin even turned #Nurph in to a trending hashtag across Australia earlier this year.

Along the way some of Nurph's Communities have been hosting Google Hangouts alongside their Twitter Chats. This combines the engagement of live video with the networking effects of Twitter. But this dual delivery approach makes for a convoluted experience for the participants; they have to have to jump between a Google Hangout in one browser window, and a Twitter stream in another -- and this makes it hard to keep track of the conversation. Why should you have to leave the Twitter World to watch or participate in a Group Video Chat experience? Nurph's new Group Video Chat for Twitter bridges the divide between Google Hangouts and Twitter Chats for the Twitter Communities who run a Google Hangout and a Twitter Chat side-by-side. 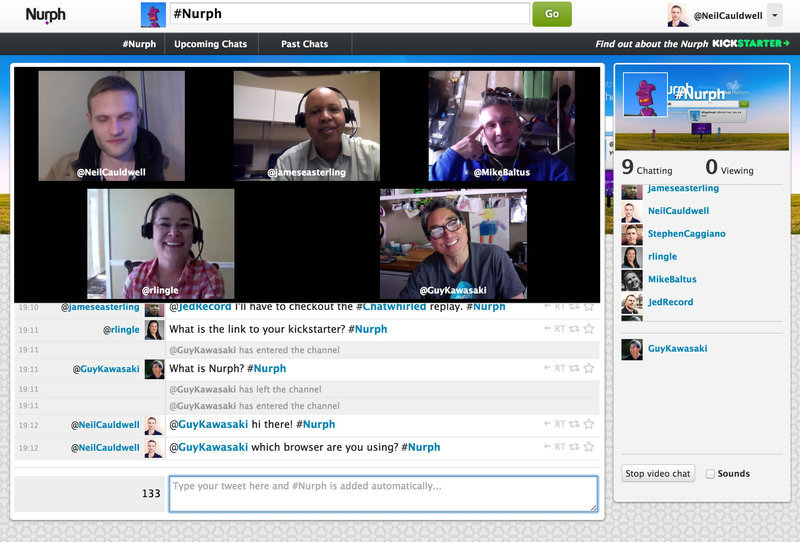 Further to this, Nurph enables the chat host to schedule a chat to be On Air and recorded. Once the chat has finished, the tweets and the video will be recorded in a replay, just like this:

This offers an incredible new opportunity for sharing and recording knowledge. Just imagine a tutor hosting an online course through their Nurph Channel with a group of students. Each each session can be recorded for people to review and share even after the session has ended.


Once you start chatting in a Nurph Channel you realise how awesome it would be to have your speech automatically converted in to tweets so that all the conversation can be Favorited, Retweeted, and shared across Twitter. And that's where the Speak & Tweet microphone comes in:

The Speak & Tweet microphone will enable you to chat away freely in a Nurph Channel and to have your speech automatically converted in to tweets -- "Shweetness! I'm luv'n that -- @jameseasterling". Follow @Nurph on Twitter for more news about the Speak and Tweet microphone soon.

We hope you'll enjoy using Group Video Chat for Twitter and look forward to chatting with you in the Nurph Channels. We'll have more news and innovative new Twitter technology for you soon.