Further to the great feedback we've received on the "Channels VS Rooms" naming convention in our last blog post, we've also noticed lots of chatter on the topic of Nurph's "who can chat" rules. Let's look at the reasons behind why Nurph works the way it does. 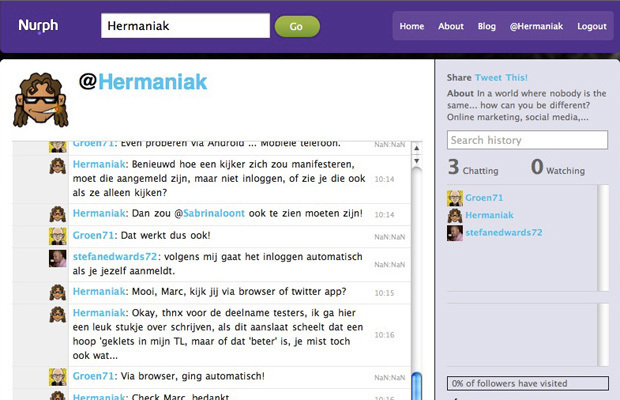 We want Nurph to enable Twitter users to chat together. Twitter has already defined it's own Following/Follower social rules, and it seems appropriate for Nurph to leverage those. You should be able to tweet a Nurph link out on Twitter in confidence, and for the right people to join the real-time conversation.

As a Twitter user, you've already defined the people that you want to subscribe to and receive direct messages from, and these are the people you Follow. You also have Followers, the people who've chosen to subscribe to you. It's likely you've reciprocated by following some of your Followers in return, in which case you'll have a reciprocal relationship (Twitter Friends?) whereby you and another Twitter user can both tweet in to each other's home page timeline, and direct message one another.When you tweet a Nurph link out on Twitter, all your Followers, or anyone who sees your tweet, can click on it (this could even be someone discovering your tweet via Google search results) - Twitter is a public broadcast system after all. We're certain that you wouldn't want anyone and everyone on Twitter to join your Nurph Channel just because you've shared it in a tweet for all to see (especially the spammers) - you only want to the right people to join the conversation. Nurph caters to this by only allowing the people you follow to chat, yet everyone else can watch the chat happening in real-time without participating. This feels like a natural extension of Twitter; everyone can participate according to your existing Twitter friendship choices, be it as a participant (the people you follow), or as a watcher (your followers).For example:@stephenfry and @eddieizzard are tweeting away at each other before deciding that they need to move to a system that's more conversational. Rather than leaving all their Twitter followers out of the loop, @stephenfry could tweet a link to http://Nurph.com/stephenfry and join the channel with @eddieizzard. @stephenfry and @eddieizzard can chat away, and anyone who was previously following the chat can continue to participate according to @stephenfry's friendships (be it as a 'participant' or a 'watcher').Several people have mentioned that they would prefer Nurph to allow any Twitter user to join their Channel by default, but at the same time they've usually mentioned that Nurph would need a "Ban" feature (to kick someone out of the channel) which would be decentralised from Twitter's existing friendship rules. Also, another user mentioned that they would prefer it if Nurph allowed their Followers to chat. In this instance you could use the "Block Follower" feature on Twitter to remove followers from the chatter, rather than a Nurph-specific "Ban" feature (like the aforementioned option).Nurph's existing rules feel like something that fits, but there's no doubting the "Who can chat" rule is still the most contentious issue around Nurph right now - so we're very interested in your feedback on this. After reading our thoughts, would you prefer:a) Only the people you Follow can chat (Nurph now)
b) Your Followers can chat
c) Any Twitter user can chat...cast your vote using the link below (or the form underneath), and please leave a comment if you have any further thoughts or suggestions: